As received in a mail..

PASS THIS INFORMATION TO AS MANY AS YOU CAN, IT MAY SAVE LIVES.

I would like to share this interesting discovery from a classmate's son who has just recovered from dengue fever. Apparently, his son was in the critical stage at the ICU when his blood platelet count drops to 15 after 15 liters of blood transfusion.

His father was so worried that he seeks another friend's recommendation and his son was saved. He confessed to me that he gave his son raw juice of the papaya leaves. From a platelet count of 45 after 20 liters of blood transfusion, and after drinking the raw papaya leaf juice, his platelet count jumps instantly to 135. Even the doctors and nurses were surprised. After the second day he was discharged. So he asked me to pass this good news around.


Accordingly it is raw papaya leaves, 2pcs just cleaned and pound and squeeze with filter cloth. You will only get one tablespoon per leaf. So two tablespoon per serving once a day. Do not boil or cook or rinse with hot water, it will loose its strength. Only the leafy part and no stem or sap. It is very bitter and you have to swallow it like "Won Low Kat". But it works. 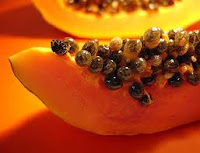 You may have heard this elsewhere but if not I am glad to inform you that papaya juice is a natural cure for dengue fever. As dengue fever is rampant now, I think it's good to share this with all.

A friend of mine had dengue last year. It was a very serious situation for her as her platelet count had dropped to 28,000 after 3 days in hospital and water has started to fill up her lung. She had difficulty in breathing. She was only 32-year old. Doctor says there's no cure for dengue. We just have to wait for her body immune system to build up resistance against dengue and fight its own battle. She already had 2 blood transfusion and all of us were praying very hard as her platelet continued to drop since the first day she was admitted.

Fortunately her mother-in-law heard that papaya juice would help to reduce the fever and got some papaya leaves, pounded them and squeeze the juice out for her. The next day, her platelet count started to increase, her fever subside. We continued to feed her with papaya juice and she recovered after 3 days!!!

Amazing but it's true. It's believed one's body would be overheated when one is down with dengue and that also caused the patient to have fever papaya juice has cooling effect. Thus, it helps to reduce the level of heat in one's body, thus the fever will go away. I found that it's also good when one is having sore throat or suffering from heat.

Please spread the news about this as lately there are many dengue cases. It's great if such natural cure could help to ease the sufferings of dengue patients.

Furthermore it's so easily available.

Blend them and squeeze the juice! It's simple and miraculously effective!!

I had searched for this in the net and found mixed responses. Modern medicine as usual does not agree to this, but Homeo does as mentioned in one of their forums.
Posted by Thahir at 10:17:00 AM

Email ThisBlogThis!Share to TwitterShare to FacebookShare to Pinterest
Labels: വിശേഷം