Let me show you a card trick, said my brother. I stopped what I was doing and looked at the three cards in his hands. He had an Ace of Diamond and two black aces. He said 'u need to touch the Ace of Diamond' and slowly he turned the cards face down. It was so slow that u cant even fool a kid with that move. The card obviosly was now on the top but before I could select the top card he told me 'let me simplify it for you. I assure you that the top card is not the Ace of Diamonds so now you only need to worry about two cards'. Clever. My bro is fooling me and I decided to play along.

I reached for the other cards one by one and found that they were the black aces. I turned the last card and found it to be the red card. He smiled and told me 'You are not watching, that is NOT the Ace of Diamond, its the Ace of Hearts, the Ace of Diamond is HERE' and he dramatically pulled the ace of diamond from the top of the deck that he never touched. I couldnt belive my eyes. The red card I saw had been transformed TO an Ace of Hearts. But I DID see the ace of diamond among the three. How can he do this, he knew no magic before!!
"Where did u learn that, u need to teach me this" I was behind him. He laughed and agreed. He taught me the trick, it was such a simple trick and he told me from where he learned it. There was this magician called Sreenivas, he runs a restaurant. I met him today thru my friend, he is a good guy, tell him that u r my brother and he might teach you few tricks', my brother told me.

In the evening I went to that restaurant and asked for Sreenivas. The cashier handed me to a waiter who took me thru dimly lighted corridors to a dimly light room. There I met my teacher the greatest magician of India Mr. Sreenivasan. He was a well build man in his early forties. With an Iron grip he sqeezed my hands when I told him who I am and ordered tea for us.

I dont think that he took me seriously when I told him that I wanted to learn magic. May be that was a question he gets ferquently. While he was talking to me a coin was rolling over his closed fist as if he is totally unaware of this. It will roll across his fist one finger after the other till it reaches the little finger then the coin will sink down and reappear again at the forefinger. It was not magic but a florish that was quite magical to watch. I was so absorbed into it, I hardly listened to what he was telling. He told me that he was busy that day and asked me to come same time after two days. He gave me a small broucher with few tricks which I believe he gives to anyone who approach him to teach magic. It was those silly tricks that one buy in a store.

The next two days I did nothing but practice that florish which is known as "coin roll". I guess I arrived little early that day. Before I opened my mouth I took out a coin and rolled it. I was sweating and shivering but I did manage to complete it. He smiled at me, his tone changed and was more welcoming. He talked a lot about magic to me.

I learned from him that broadly modern magic is two types. Magic that is done with props and one without props. The propped magic needs assistants for distraction, strange colorful props, distance from audience etc. It is very impressive, gives totally supernatural results, but without the props the magician is nothing, all u need is money to buy those props and an average presentation skill and with little bit of luck you could be a well nationally known magician. Even though improptu magic is less colorful that is where the real magic lies, it is performed from day to day objects like cards, coins, towels, tissue papers, safety pins, currency notes etc, at arms distance from your audience and it needs a lot of practice and skills which u cant buy with money. Sreenivas was the epitome in improptu magic in India. He was the only magician in India who had made his mark internationally.

That all happened many years before. I am totally out of Magic circle now. I dont perform any tricks anymore. But I kept my communication with him thru all these years which had thinned towards the end. 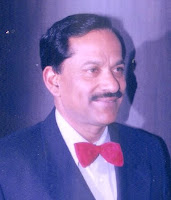 "Sreeni died yesterday, had an heart attack". My brother was at the phone. I just stood there. I was sad. He was a great magician, good friend and a wonderful teacher. 15 June 2010 was my last chance to talk to him and I missed it. I am sad that I wont see you anymore Sreeni. I might forget, if not already, those tricks that u painfully taught me, but u sure will have a place in my heart forever.
Posted by Thahir at 4:56:00 PM

Email ThisBlogThis!Share to TwitterShare to FacebookShare to Pinterest
Labels: നേര്‍ചീന്ത്